Aidan Field (エイダン・フィールド, Eidan Fīrudo?) is a character in the Violet Evergarden series and the protagonist of the third chapter of the first volume in the light novel. He was a soldier fighting for the moderate faction of Ctrigall, a country that is in a state of civil war with extremists who wants to return to the war. Unsure of what to do with his money, he decided to use the service of Auto Memories Doll and entrusted Violet to write letters for his parents and his lover Maria before his death.

Aidan was a young man with a slender and muscular build with freckles located on the bridge of his nose. He had wavy dark blond hair and light brown eyes. He was also noted to be rather handsome.[1]

Aidan had always been kind, confident and considerate since childhood. However, as he grew older and got exposed to the true nature of civil war, Aidan became very scared of dying, he favored exterminating others rather than being exterminated. He only lived with the thought of surviving and returning back to his family and childhood friend as well as lover Maria. Although horrified by it, Aidan was able to accept the fact that all his comrades were being annihilated in the war, which made him traumatized and scarred with everything that happened around him. He didn't want to hurt or kill anyone, not being able to understand the reason why people had to fight and kill each other. As a human being, Aidan felt completely lost about who decided that things should end the way it did. He wished to have never taken part in the war and dreamed of returning back home since he wanted to meet everyone in his hometown again.

It is also seen that Aidan was a very helpful young man with a strong sense of justice, as he would rather see Yale, someone younger than him, survive rather than himself. He would always put people before himself and cherished his comrades deeply. He also wanted everyone, including himself, to live a happy life, free from the conflicts of the war. His parents and his girlfriend Maria meant everything to him, and he is sorrowful to have left them behind before thanking and apologizing to them properly, which he regretted more than anything. However, he was able to rest peacefully as Violet gave him the warmth he required in his last moments and since she promised that she would convey his feelings to his loved ones.[1]

Aidan grew up with his parents in the countryside. As a child, he also became good friends with a girl named Maria and a boy name Yale who grew up in the same province as him. Ever since childhood, Aidan proclaimed to his parents that he would become a baseball player. He was talented at the sport enough to bear ambitions towards it, and, after graduating, he had already decided to join a prestigious baseball team. Although he was a small town boy, he thought that he could become a professional player. To him, such a future was already certain.

However, as Aidan grew up, instead of becoming a baseball star, he became a fighting soldier for a moderate faction of Ctrigall, a country that is in a state of civil war with extremists who wants to return to the war. The government decided on its own that they were obligated to come there, so Aidan didn't have a say in this. Around that time, Maria confessed her love to Aidan and he reciprocated her feelings, so they become an official couple. However, as Aidan claimed, before having done anything with her that couples usually do, he was sent away to Ctrigall to fight as a soldier in the 34th National Army.[1]


The CH Postal Company receives a request for a doll from the neighboring country of Ctrigall, however, the country is in a state of civil war between the warmongers and moderates. The request is from Aidan, who is a soldier fighting on the front lines, but due to the danger, Hodgins refuses the request. Violet overhears and travels to Ctrigall to find Aidan.

Aidan fought for the moderate faction within the dense forest of a continent far away from his motherland. The enemy nation that his country fought against kept an oilfield drilling facility in secret. The mission of the 34th National Army, which Aiden belonged to, was to charge into the said facility and take complete control of it. The squad constituted of a hundred people in total and their strategy was to split into four groups and strike from all sides. After a sudden first attack from the enemies, the simultaneous raid from all four sides was destroyed along with the formation of the groups by a sudden rain of bullets. In the process, Aidan's squad was annihilated by the enemy and he is gravely wounded. His friend and comrade Yale survived and Aidan attempted to help him before he got shot as well. Terrified, Aidan left his annihilated squad behind and he was tracked down by the enemies. Before they were able to finish him off, Violet arrived by parachute, defeated the enemy soldiers, and rescued Aidan.

Briefly thereafter, the two arrived at an abandoned cottage with the intention of using it as a temporary hideout. Believing that he is mortally wounded, Aidan has Violet write farewell letters to his parents and girlfriend Maria. With the letters complete, Violet comforts Aidan in his final moments as he pictures himself reuniting with Maria. Violet delivers the letters to Aidan's parents and Maria. Despite being saddened by Aidan's death, they thank Violet for delivering his final letters to them. Violet then breaks down in tears, apologizing for being unable to protect Aidan.

Violet buried Aidan and used his rifle as a grave marker.[1][2] 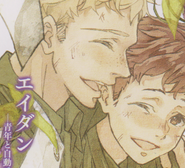 Aidan together with Yale.

Aidan encounters Violet.
Add a photo to this gallery

Retrieved from "https://violet-evergarden.fandom.com/wiki/Aidan_Field?oldid=4423"
Community content is available under CC-BY-SA unless otherwise noted.