Drossel Kingdom
Alberta (アルベルタ, Aruberuta?) is a character in the Violet Evergarden series. She is a court maid who serves the royal Drossel family. She was previously the maid of the princess of said family, Charlotte Abelfreyja Drossel.

Alberta is a middle-aged woman with a few age-marks and grey eyes. She has umber-brown hair which she wears in a braided bun at the back with middle-parted bangs framing her face. She is usually seen wearing a simple black dress with a white collar.[1]

Alberta is a very serious, mature, and realistic woman who takes her job seriously. She doesn't let her emotions get the better of her and manages her job effectively, to which she can come off as very frank and is not above scolding Charlotte when needed. Despite that, she is very caring and loves Charlotte deeply, and appears to be emotional as she witnesses Charlotte's growth to a woman as she marries and moves to a new country.[1]

Alberta has been a court maid for the Drossel family for a long time. She was the court maid for Charlotte's mother, so she has known Charlotte ever since she was a baby. She raised Charlotte all throughout her childhood.[1]

At the request of the military, Violet is sent to the Kingdom of Drossel in order to write a public love letter for its princess, Charlotte, to Damian Baldur Flugel, the prince of the neighboring Kingdom of Flugel. Alberta is seen guiding Violet to Charlotte's room and waking her up. The following days Violet stays in the city, Alberta reveals her past with Charlotte and how she has known her ever since she was a baby. But she also scolds Charlotte when she acts immature and lets out her honest emotions. When Violet gets an idea and arranges with Damien's Doll to have Charlotte and Damian write their own letters to each other, Alberta helps Charlotte with her letters. The wedding then goes as planned, and before the wedding ceremony, Charlotte and Alberta share an emotional scene and goodbye as Charlotte is set to leave Drossel.[1] 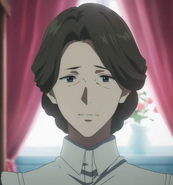 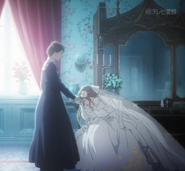 Charlotte bows to Alberta.
Add a photo to this gallery

Retrieved from "https://violet-evergarden.fandom.com/wiki/Alberta?oldid=4400"
Community content is available under CC-BY-SA unless otherwise noted.