Damian is a rather handsome man with fairly long, red hair that he wears in a low, loose ponytail with bangs slicked back that has some locks of hair framing his face and purple eyes.[1]

Charlotte notes that Damian is a very busy man who is also kind and speaks plainly, though not in a bad way. He sees people for who they are, and not what their status tells what they are.[1]

The first Damian met Charlotte was outside the Drossel castle. She was crying due to her frustration that every man she met on this day; her birthday, would be a possible future husband for her. Damian told her that she came off as a sassy brat and was glad that she could cry too. He ensured her that it was okay for her to cry, and he told her to cry all she wanted; he would be there for her. The fact that he spoke with her so casually with no motives, made Charlotte really happy and ever since that day, she couldn't forget that moment. After the war, Charlotte received a proposal out of nowhere. Charlotte was determined to make the marriage be between Drossel and Flugel, and eventually, Drossel chose Flugel family.[1]

On the request of the military, Violet Evergarden is sent to the kingdom of Drossel in order to write a public love letter for its princess Charlotte, to Damian, the prince of the neighboring kingdom of Flugel. Violet's mission is crucial since Drossel and Flugel were previously enemies in the war and are arranging the marriage to cement the terms of the peace treaty. Despite Charlotte being anxious about the wedding, Violet writes the love letter, and Damian writes a letter back in response, but Charlotte does not appear satisfied with it. Charlotte later confides in Violet that she met and grew infatuated with Damian when she first met him since he treated her as a person and not a potential wife. However, she's unsure of whether Damian reciprocates her feelings or not, since she could tell the letter he returned contained no emotion in it. Violet then gets an idea and arranges with Damian's Doll to have Charlotte and Damian write their own letters to each other. This starts a heated but passionate correspondence between the two that entrances everybody in both kingdoms. The wedding goes as planned while Violet and Cattleya, who was Damian's Doll, watch over the wedding.[1] 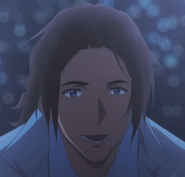 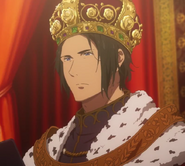 Damian in the Violet Evergarden Movie.

Deutsch
Community content is available under CC-BY-SA unless otherwise noted.