A playwright with writer's block and a tragic past summons Violet to the country of Genetrix to help him finish a script. They both learn about grief.

Violet goes to assist a famous writer, Oscar Webster, in writing his next play. However, she arrives to find him a drunk recluse. Violet manages to convince Oscar to suspend his drinking while they work, and they begin writing the play. The play is about a girl named Olive who uses her power to summon magical sprites to defeat a beast, but in doing so sacrifices her ability and becomes stranded away from her home and father. Violet becomes curious about how the story will end, which Oscar hasn't decided upon yet. Violet then finds a parasol, triggering an angry outburst from Oscar. He then admits to Violet that he based Olive off of his daughter Olivia, who had died from illness, and he is trying to write the play as a way to cope with his grief over her loss. Violet then inspires Oscar with the idea of Olive using her magical parasol to fly home. Oscar comes to terms with his daughter's death and thanks Violet. On the way home, Violet begins to suffer regrets over the people she had killed during the war, wondering how many happy endings she may have prevented. Upon returning to Leiden, Violet learns from Mrs. Evergarden that Gilbert is dead and confronts Hodgins. He admits that after their final mission, neither Gilbert nor his body could be found, but his dog tags were recovered, leading to the army presuming him dead. Violet remains in denial about Gilbert is dead and flees the post office in distress. 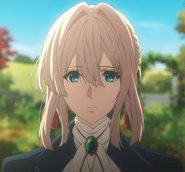 Retrieved from "https://violet-evergarden.fandom.com/wiki/Episode_7?oldid=6438"
Community content is available under CC-BY-SA unless otherwise noted.