View source
watch 01:36
We're Getting Mutants in the MCU - The Loop
Do you like this video?
Play Sound

CH Postal Company
Erica Brown (エリカ・ブラウン, Erika Buraun?) is a character in the Violet Evergarden series. She is an Auto Memories Doll who has been working at the CH Postal Company for a while. She is not good at communicating and isn't confident in her work.

Erica is a young woman with a relatively short stature and thin eyebrows. She has short, straight light brown-honey colored hair which reaches down to her chin with straight bangs covering her forehead. Her hairstyle somewhat resembles that of a longer bowl cut. She sports round, transparent glasses which she wears over her medium-colored amber eyes. She also has freckles located on the bridge of her nose and a small mole underneath her lip.

Erica is a quiet girl who is usually seen in the backgrounds. She isn't confident in her own work as an Auto Memories Doll and is easily swayed by other opinions and takes criticism on her work seriously and to the heart. She also always worries inwardly over her exchanges with her clients and has no confidence in her job. This has led to her timid personality and low self-confidence. However, it is evident that Erica is a strong-willed, very thoughtful and kind girl who will firmly stand to her own opinions.[2]

Erica was motivated into becoming an Auto-Memories Doll due to a certain novelist’s influence, which made her wish she could write texts that resonated with people’s hearts. 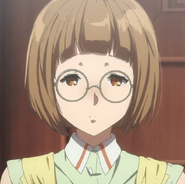 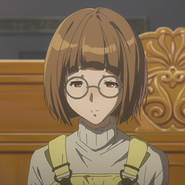 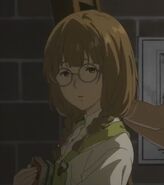 Erica in the Eternity and the Auto Memories Doll Movie. 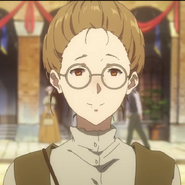