CH Postal Company
Iris Cannary (アイリス・カナリー, Airisu Kanarī?) is a character in the Violet Evergarden series. A rookie Auto Memories Doll with an unyielding spirit who works at CH Postal Company, Iris admires young working women and is enthusiastic about quickly making a name for herself in the industry.

Iris is an attractive young woman with a tall, slim build and tan skin. She has messy, ear-length cedar brown hair with long bangs framing her face and two short strands of hair pointing up. She has yellow-golden eyes.[2]

Her working attire consists of a sleeveless brown shirt and a gray undershirt connected to her heeled green-grey shoes. She wears a pair of unbuttoned white trousers and a belt with orange and black stripes. She also wears accessories such as a gold necklace with a green band and an aqua-blue bracelet.

Iris is rarely afraid to speak her mind, as shown by her boredom with her job and open expression of disinterest toward ”boring” tasks as a Doll. She wishes to be given more interesting tasks, such as writing love letters to celebrities, which is what she thought she would do when she became a Doll. She comes off as blunt, short-tempered and dishonest, concealing her true feelings towards others. She is also self-confident as she notes that she is amazing and has what it takes to become Leiden's most talented Doll. She doesn't like making mistakes, which is why she isn't quick to admit them. She can get easily carried away and overly excited when she gets requests to write letters.[3]

She sometimes acts and talks very impulsively and without thinking about the consequences, in which she lets her emotions get the better of her when she is upset. However, after realizing what she caused, she will apologize and genuinely admit her mistakes. She is also kind and caring for her close friends and family despite her fierce, sassy, and cold attitude.

Iris is a very hardworking and dedicated woman who doesn't stop trying until she reaches her goal; although she wasn't cut out to be a Doll, she worked non-stop to learn how to write in order to become a successful Doll. Iris also always admired the image of a working woman and has aspired to become Leiden's most popular Doll. She is very passionate about her job as a Doll, and she doesn't want people to underestimate the struggles of becoming one. She is strongly against giving up her work as a Doll in order to get married and settle down at home.[4]

Iris was born and raised in a village in the countryside called Kazaly. As a child, she became friends with a boy named Emonn Snow and the two were very close. Iris was in love with him, and she had also supposedly convinced herself that her feelings were reciprocated. Because of that, she confessed to him before they graduated school, but he rejected her confession. The emotional pain caused by Emonn's rejection was what caused her to leave her hometown to become an Auto Memories Doll. Although she wasn't skilled at writing, Iris was very dedicated and took classes at the Auto Memories Doll Training School, eventually graduating from the preparatory school and becoming a Doll in Leiden.[4] She is currently a newbie Doll at the CH Postal Company.[2] 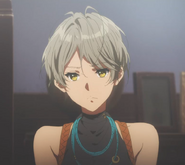 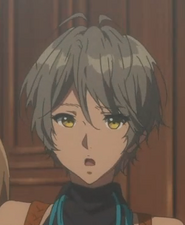 Iris is happy to be writing a letter.

Iris proud of getting a request.

Iris argues with her mother.

Iris' angry outburst at her mother.

Iris sad after her birthday party.

Iris after hearing Violet's reason for becoming a Doll.

Iris holding the flower she is named after.
Add a photo to this gallery

Retrieved from "https://violet-evergarden.fandom.com/wiki/Iris_Cannary?oldid=4722"
Community content is available under CC-BY-SA unless otherwise noted.