Leon Stephanotis (レオン・ステファノティス, Reon Sutefanotisu?) is a character in the Violet Evergarden series and the protagonist of the fourth chapter of the first volume of the light novel. He is a misogynistic teenager, but after meeting Violet, who is tasked with helping make copies of rare books for his company, his view of women starts to change. He initially worked as an astronomer at the Shaher Astronomical Headquarters.

Leon is a cynical, grumpy, and cold young man. This is because he was treated as an outcast at the Observatory due to being an orphan. He is rather blunt and is not very good with words or respect, especially when it comes to women. He was highly misogynistic due to an event from his past, but his attitude changed after meeting Violet, the first girl he has ever fallen for. His view of women also starts to change after meeting different women who work as an Auto Memories Doll. Meeting them made him realize that they weren't girls who were only after rich men, but women who were serious about their jobs and to convey people's feelings. He knows he's bad with women and initially disliked them, but he doesn't hate all of them and believes that there are good women in the world, such as Violet. He also has a bad habit of associating his mother who abandoned him with anything.

Leon's mother was a nomad, someone who visits many places and gives performances like dancing, singing, and crafting, thus promoting their own works. Leon describes those women as those who hook up with men wherever they go, and those who fall head-over-heels and chase after just one. They’re normally one of these two types. Leon's mother was no exception; she fell in love with a man from the city and gave birth to Leon.

Leon was raised in the arms of Mount Eustitia; he had always watched the night sky, leading a life of ever been addicted to astronomy. His time was dedicated to the stars, with no openings in his routine for outsiders to sneak into.

Leon believed that he lived a happy life with his family as a child. Although his mother loved him deeply, the object of his mother’s affection was primarily his father, and Leon was nothing more than the outcome of it. When he was still a child, Leon’s father, who was working at Shaher's manuscript acquisition department and traveled across the continent collecting rare books, disappeared. Everyone, including Leon and his mother, lost complete contact with him. Leon's father did not return, and the search was called off after two years. It was then Leon's mother decided to try finding him. She had to choose between two decisions; stay with her son or search after her husband. Leon claims that it was an easy decision for her, and although she was saddened by her final decision, she chose to search after her husband. Before leaving, she promised Leon she would come back with Leon's father. When she didn’t, Leon had been sad for being abandoned by his mother. From there on, Leon developed a hatred towards women, since he claimed they lived and died for love, describing them as extremely selfish. His mother's actions left a permanent scar on him.[1]

Leon joined the Shaher Astronomical Headquarter's Manuscript Division at a young age. However, what he really wanted was to work in the acquisition department like his father. He felt that his mother, along with his father, would return to him if he waited there for them. Despite being disliked by his peers due to being a young orphan, as well as his attitude, Leon grew up in and stayed at the Observatory. He believed that it was possible for him to fulfill his dreams at the Observatory until he met Violet, who changed his mind.[2]

Violet, along with a number of other Dolls, arrive at the Shaher Observatory in order to help the scholars make copies of a number of rare books. Violet is paired with the scholar Leon, who initially dislikes her and Dolls in general. However, he is impressed with how quickly she works, and together, they finish a three-days worth work in a day. Eventually, he begins to soften up to Violet. He also invites her to view Alley's Comet with him, which only appears once every two hundred years, and she accepts. While the two stargaze, Leon explains that his father was also a scholar at the observatory but disappeared on an expedition. His mother then left home to search for him and never returned either, causing Leon to resent them and the concept of love. Violet, in turn, tells Leon about her devotion towards Gilbert, to which Leon realizes Violet is in love with Gilbert. The next morning, Violet is preparing to leave now that her job is complete. Leon sees her off and tells her that instead of waiting at the observatory for his parents to return, he'll start traveling the world like Violet to go look for them. As Violet leaves, Leon wonders if he'll ever encounter her again.[2]

For his young self, his mother was his entire world. Were she not already there from the start, she was his outright guardian from the moment he had been born until he had become aware of the things around him. She would find him whenever he ran off crying and praise him whenever he did something good. Whenever he would reach out his hand, she would embrace him. Leon’s mother had told him about how green was an extremely rare hair color, which is why he was so special and precious. All of these statements are why Leon would never have thought that she would be gone one day. After his mother abandoned him, Leon was very sad and hated himself for wanting to be keeping watch on that door where she left him. His mother's action made him hate women and love in general, this left a scar on him, resulting in him becoming cold.[1] Despite that, Violet notes that Leon presumably still considers his mother very dear to him.[2]

He is partnered with Violet when his employer pairs researchers and Auto Memories Dolls together for a collection of research pieces. Although he is cold and blunt to her in the beginning, he is impressed with how quickly she works and begins to soften when he sees that she doesn't care about his background or upbringing as an orphan. Because of how similar they are, it makes it easy for them to sympathize with each other. Due to this reason, Leon starts to develop feelings for Violet (his feelings are implied in the anime), which is emphasized by the fact that he seen to be amazed by her beauty, starts acting very nervous and flustered in her presence, and longing to see her.[2] Before Violet's departure, Leon musters up his courage and confesses his feelings towards Violet. However, since Violet doesn't understand love very well and already has someone else very dear to her, she couldn't accept his confession. Despite this, she is seen to be happy by his confession, to which Leon accepts and is content with.[1] He then tells Violet that instead of waiting for his parents to come home, he will expedite around the world like her. And he wants her to, if they would ever meet again, to watch the stars with him, to which Violet gives him her word. After that, Leon was sure that he would not hesitate any more, because she had given him the courage to move forward. He was also sure he would no longer despise anyone for closing a door with their back turned to him, such was the result of making a promise to Violet.[2] When they meet again, Leon is aware that he is still in love with Violet and that his feelings towards her would not budge, but he decides to put that fact aside and ask her to watch the stars with him instead.[1]

Leon's roommate and close friend at the Shaher Observatory. Since Kyle is Leon's friendly older colleague, he is quick to sense his changes in expression and worries, but ends up watching over him from their distanced seats as if having fun. Kyle constantly babbles to Leon about his life, which Leon considers to be a hassle sometimes. Despite that, the two care for and support each other.[1][2] 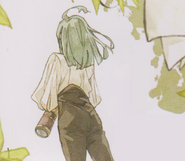 Leon traveling around the world.