Luculia is a fair-skinned young woman of medium height with freckles and olive green eyes. She has long, straight scarlet-red hair, which falls down to her lower back, with two locks of hair framing her face on each side. She also styles her hair by wearing a braided headband. After becoming a Doll, she wears her hair in a high ponytail with a golden band.

Luculia is constructed as a kind and considerate person who is willing to go out of her way to assist others, shown by events such as her offering Violet Evergarden some of her food the first day they met or attempting to help her write a letter to Gilbert Bougainvillea. Despite a tragic backstory, she is shown to carry a positive attitude and cheerful demeanor when around other people, but tends to be more quiet and solemn when alone. She is expressive and sociable, but she struggles to communicate her own feelings, particularly regarding her brother. She always looks to assist others in any way she can and can be described as selfless.[2]

Luculia had a normal yet very peaceful childhood with her parents and older brother, Spencer Marlborough. When the war began, Spencer was drafted into the army. However, there wasn't much fighting on the Western Front where Spencer was located, so Luculia claims that the war didn't feel real to them. However, one day when Luculia's parents went to a town for business, the Western Front was broken through, and her parents were killed in the fighting. After the war ended, Spencer came back alive, which was more than enough to make Luculia happy despite their parents' deaths. However, Spencer blamed himself for the deaths of their parents, and fell into depression and alcoholism, after which Luculia began taking care of Spencer.

Luculia meets and befriends Violet Evergarden when she begins attending the Auto Memories Doll Training School. The next day, Violet and Luculia are assigned to practice their actual ghostwriting skills on each other. She graduates the class with top marks. Luculia later meets Violet, offering to ghostwrite a letter to Gilbert, but Violet cannot find the words to say. She tells Violet about how her parents died in the war and how her brother feels guilty over failing to protect them. She wants to tell her brother that she's just glad he's alive and home, but likewise cannot find the words to say. Touched by Luculia's words, Violet manages to write a short and concise letter that effectively conveys her feelings to her brother. After he reads the letter, Luculia helps her brother to the top of the bell tower to enjoy the view like they used to as children.[2]

Luculia later meets Violet again at Shahar Observatory, praising her for the beautiful letters she wrote for Princess Charlotte Abelfreyja Drossel. Luculia and several other Dolls are tasked to help the scholars there make copies of a number of rare books.[3]

Sometime later, Luculia is overjoyed after receiving a letter from her brother thanking her for everything she's done for him.[4]

After the war ended, Luculia met up with Violet and her colleagues to watch the Air Show together.

Three years later, Luculia bumped into Violet at a bridge who was training Taylor Bartlett on mail delivery and alphabet reading. A man called her shortly after showing them the directions to New Town and, suggesting by the ring on her finger, it is revealed he is the man she is going to marry eventually. Violet and Taylor then waved goodbye to the couple before heading off. Back at the postal company, Erica Brown revealed that Luculia plans to continue working as a doll even after she got married, in contrast to most dolls quitting after marriage according to Iris. 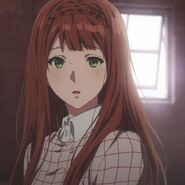 Luculia at the bell tower

Luculia just wants to tell her brother "thank you"

Luculia and her brother on top of the bell tower 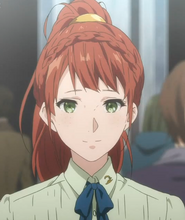 Luculia happy over receiving a letter from her brother

Luculia's appearance in the movie, soon to be married to this man.