Playwright
Oscar Webster (オスカー・ウェブスター, Osukā Webusutā?) is a character in the Violet Evergarden series, and the protagonist of the first chapter of the first volume of the light novel. He is a playwright who used to seclude himself due to the deaths of his wife and daughter. However, after deciding to write his very first children's play to dedicate it to his daughter's memory, he entrusts Violet with the task of putting his ideas on paper.

Oscar is a man in the prime of his life. He has unkempt red hair with a curl and wears thick, black-rimmed glasses over his olive-green eyes. His back is slightly hunched, but his face lends him an air of youthfulness.[1]

Oscar describes himself as a normal man with many quirks, and someone who is not fit to be the protagonist in any sort of story. After the deaths of his wife and daughter, he became severely depressed and even left his name in the industry. He also became lazy, dissolute, and grief-indulged. He was rather pessimistic and believes that humans are creatures that easily become tired of being sad or happy, and cannot continuously be either forever. He despised the ugly reality of the world, which is why he started drinking. However, thanks to the assistance of a doctor, he was able to overcome the alcohol and drugs but was left with a tremor in his hand.

Oscar kept to himself and was very secluded from the rest of the world. He did not read newspapers or magazines and rarely hung out with anyone. Other than his friends, the only people he had contact with were cashiers and deliverymen. He was very self-loathing and felt extremely guilty for being the only member of his family left alive, wishing instead to die along with them. Despite that, he has shown to be a responsible, supporting, and kind man with a playful side to him. He also deeply loved his wife and daughter when they were alive, as he was seen to be very selfless and would often put their happiness above his own. His family meant everything to him.

Although he wanted to get back to the writing industry again to honor Olivia's, his daughter's memory, he simply could not progress properly. The desire to write, however, had remained in his chest. Eventually, with the help of Violet, Oscar successfully writes a play and comes to terms with his daughter's death and that he is alive.[1] After recovering, Oscar returned to the playwright industry, now appearing as a happier man.[2]

At some point in his life, Oscar married his wife and together, they had one daughter, Olivia. The three lived a happy life together in a villa until Oscar's wife was diagnosed with an illness that caused her blood vessels to clot rapidly, resulting in her death. Moreover, it was hereditary, and his wife had inherited it from her father. At her funeral, one question had constantly echoed in Oscar’s head: “Why?” After the death of his wife, Oscar and Olivia moved to their summer home in Roswell and began living there. Although both of them were sad due to death of Oscar's wife, they helped each other out and remained happy. One day, Olivia saw a fountain that looked like an oasis, and on the water’s surface, leaves coming from the surroundings had been floating. She had commented on how pretty they were. She then promised her father that she would try crossing the lake close to their house by walking on the decayed leaves that fell on the water. Oscar states that he would wait as long as it would take.

Oscar's wife’s best friend was an auspicious person, and as he had lost spirit with the death of his wife, she had energetically taken care of him and his daughter. She would prepare warm meals for Oscar and braid Olivia's hair. Oscar thinks there may have been a bit of one-sided love involved. After learning that Olivia had inherited her mother's disease, they relied solely on famous and unmatched doctors, unlike when his wife had gone through the same hardship. They went from hospital to hospital, asking for help and gathering information for testing new drugs. In the end, the medics had given up and declared her as incurable. Being on their own again after Oscar's wife's friend distanced herself from the two, Oscar had an argument with one of the doctors so that Olivia could come back home and take nothing but painkillers.

From then on, there had been a little bit of peace, and Oscar saw his daughter smile for the first time in a while. After Olivia passed away in their home, Oscar buried her in the same cemetery as his wife. He then quietly resumed his life.[1]

After years of mourning for his daughter and wife, Oscar had been approached by a colleague from his former job, who had asked him if he could write a screenplay again. For Oscar, a request from a theatre group that everyone admired was an honor. Oscar had accepted the offer with an immediate feedback, deciding to hold onto a pen once more. However, it was from then that his problem had started. Whether he wrote on paper or with a typewriter, he simply could not properly progress. As he had asked for advice from the old work colleague that had made him the request, the latter had told him to use an Auto Memories Doll.[1]

Oscar requests the use of a Doll, which tasks Violet to assist Oscar in writing his next play. However, she arrives to find him a drunk recluse. Violet manages to convince Oscar to suspend his drinking while they work, and they begin writing the play. The play is about a girl named Olive who uses her power to summon magical sprites to defeat a beast, but in doing so sacrifices her ability and becomes stranded away from her home and father. Violet becomes curious about how the story will end, which Oscar hasn't decided upon yet. Violet then finds a parasol, triggering an angry outburst from Oscar. He then admits to Violet that he based Olive off of his daughter Olivia, who had died from illness, and he is trying to write the play as a way to cope with his grief over her loss. Oscar then requests Violet to cross the lake close by walking on decayed leaves on the water, in order to get inspiration and to fulfill the promise he exchanged with his daughter in the past. In doing so, Violet inspires Oscar with the idea of Olive using her magical parasol to fly home to her father. Oscar then comes to terms with his daughter's death and thanks Violet, successfully creating a play with a happy ending.[3]

Oscar is later seen to have returned to the industry and is now working hard to make a real play out of his story script about Olive.[2] 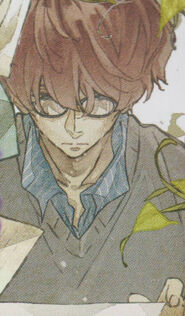 Oscar in the light novel.

Oscar with his family.

Oscar in the past.

Oscar "reunites" with his late daughter.

Oscar in episode 9, working on his new play.
Add a photo to this gallery

Retrieved from "https://violet-evergarden.fandom.com/wiki/Oscar_Webster?oldid=4550"
Community content is available under CC-BY-SA unless otherwise noted.